For the first time, the university's West Campus community—students who live there, stakeholders who provide services, and employees who pass through the corridor daily—have storefront access to The University of Texas at Austin Police Department (UTPD) with the Aug. 31, 2021, opening of UTPD West. This satellite office for UTPD daily operations is located on the first floor of Walter Webb Hall (WWH) at 25th and Guadalupe Streets and is open Monday through Friday, 10 a.m. to 2 p.m.

According to Noelle Newton, UTPD Director of Strategic and Executive Communications, UTPD West now operates a storefront in the area where UTPD currently gets the most requests for services mid-day when campus is most active with students and employees crossing the Guadalupe Street corridor. Although officers have access to the space 24 hours a day, at night they are out and about in West Campus being a visible presence to deter crime. In addition, a 911 call box located on the sidewalk immediately in front of the entrance is available for emergency assistance during non-office hours. The line dials directly into UTPD’s 911 dispatch center.

Newton explained that the services were not established to replace, but rather to enhance the service of the Austin Police Department. The area remains under the jurisdiction of the City of Austin.

"Our hope is that UTPD West will offer a space where students, employees and stakeholders such as business and property owners will feel comfortable walking in and talking with UTPD staff," Newton said. "Opportunity is the word that comes to mind. This is getting to know each other. We want to understand their quality of life issues and work to resolve them. Also, our students and employees know the area best. They walk the same path, use the same parking garages, they know when something is off. The more comfortable our community feels just talking with us, the less hesitant they will be to call us during a crisis. We have the opportunity to work together to make everyone’s experience here at the university healthy and happy." 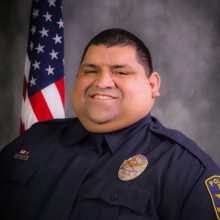 Officer Roberto Rodriguez is the UTPD West District Representative. Of the eight years he has served within UTPD, he has been an officer since 2015. In addition, he serves as a member of the University Crisis Intervention Team.

Rodriguez explained that UTPD has nine patrol districts, including UTPD West. As a district representative, he is the department's liaison with West Campus. He meets with students who live there, staff who work or park there, and business and property owners to learn about and address their safety concerns to the extent possible. Student concerns are generally about personal safety, and Rodriguez offers basic tips to students that can apply to staff as well, such as walking with friends, being aware of their surroundings and keeping to well-lit areas.

"I respond as things come up, and if time allows, I walk around the area," Rodriguez said. "I enjoy getting to talk to the community and work with them to come up with ideas to address their concerns. We can’t be everywhere all of the time, so I explain what we can do."

Newton noted that parents of students have responded positively to the opening of UTPD West.

"We have had a good response from parents," Newton said. "We believe it offers them some reassurance that the university is there for their students, even within the City of Austin’s jurisdiction. While we are not there to replace the Austin Police Department, we are there to assist them in any way we can. This is another way we can care for our community members. Having the visible presence reaffirms that mission."

Newton added that the presence of a satellite office on Guadalupe Street can lead to quicker response time for UTPD calls for service as well as act as a deterrent to crime.

"It not only offers a way to build a better relationship with our community, but also with our partner law enforcement agencies," Newton said. "For example, the Texas Department of Public Safety and the Austin Police Department officers are invited to use the space."

Describing how UTPD West came into being, Newton said that in spring 2020, the UT System Board of Regents provided UTPD with an $8 million dollar grant to expand police service to create a West Campus District, hire 13 officers, add a security camera system and open a satellite office on Guadalupe Street that became UTPD West. The funds were to be distributed over the course of four years, and UTPD West officially opened on Aug. 31, 2021. 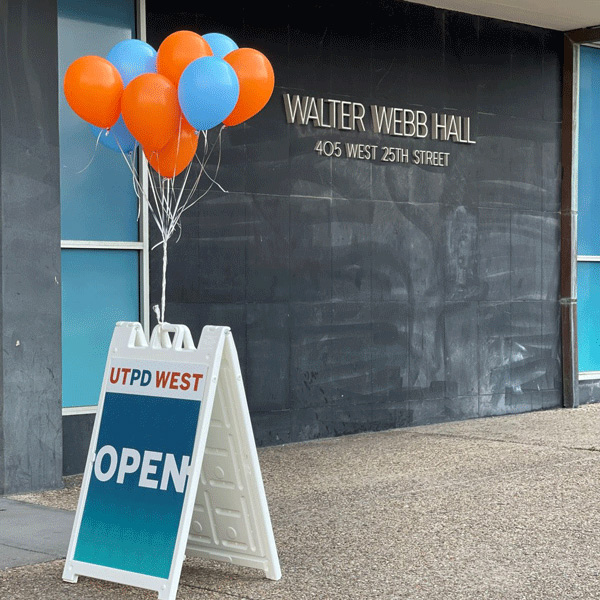 The West Campus community now has storefront access to The University of Texas at Austin Police Department (UTPD) with the Aug. 31, 2021, opening of UTPD West, a satellite office for UTPD daily operations located on the first floor of Walter Webb Hall (WWH) at 25th and Guadalupe Streets.
Safety Service