A project to install a surplus chiller at the Pickle Research Campus (PRC) involved multiple teams from Utilities and Energy Management (UEM). According to UEM Associate Director for Power Plant and Chilling Station Operations Ryan Thompson, the summer installation project was a team effort among the UEM Chiller Maintenance, Chilling Station Maintenance and Operations, Electrical, Instrumentation and Control, and Programming shops and UEM’s Energy Management and Optimization (EMO) unit. Unit managers coordinated the work, with Thompson managing the project overall.

Thompson explained that a chiller cools water that is pumped to buildings to cool the air. Once the water warms, it loops back to the chiller to be cooled again. The central chilling station at PRC had four chillers dating back to the 1980s. When one failed, UEM began exploring options immediately.

"The chiller would cost an outside contractor approximately $180,000 to fix, and it’s not like an antique you’d want to restore," Thompson said. "New, a chiller this size would cost around $3.5 million, not counting installation."

UEM wanted to be the best possible steward of the university’s financial resources. After searching, Chiller Maintenance Manager Steve Schoelzel found a used, more modern chiller online from a supply company in Dallas at a tenth of the cost of a new chiller.

"I made several trips to look at it and was very impressed," Schoelzel said. "It looked brand new. I did further trips to be sure all the parts worked and they did."

Once all necessary approvals for purchasing the chiller were given, Business and Financial Services helped coordinate the purchase, Thompson said. Despite weather- and pandemic-related delays, UEM completed installation the first week in July.

"Installation took a while because there was a lot of work involved," Schoelzel said. "UEM did all of it, and we beat the summer heat."

Thompson explained that work included rigging and setting the chiller and associated equipment, fitting and welding new piping, and installing electrical and instrument circuitry and programming, as well as insulation.

UEM Associate Director for Energy Management and Optimization Roberto Del Real explained that his division was involved with the chiller set-up from the beginning, ensuring that there was adequate power for the chiller and that power would go to the chiller correctly for optimal operation. The Energy Management and Optimization (EMO) team also worked with UEM’s Electrical Distribution division to install cables and connect the chiller where needed. In addition, EMO set up the interface for real-time monitoring for trouble-shooting as well as for data gathering.

Once all installation was complete, UEM operators started up the chiller.

Thompson noted that the chiller installation was not only about teamwork and financial stewardship, but also about sustainability. In addition to saving power through optimized chiller operation, the refrigerant used is more environmentally sustainable, as indicated by LEED rating.

Thompson said that the remaining three older chillers will be replaced over time. 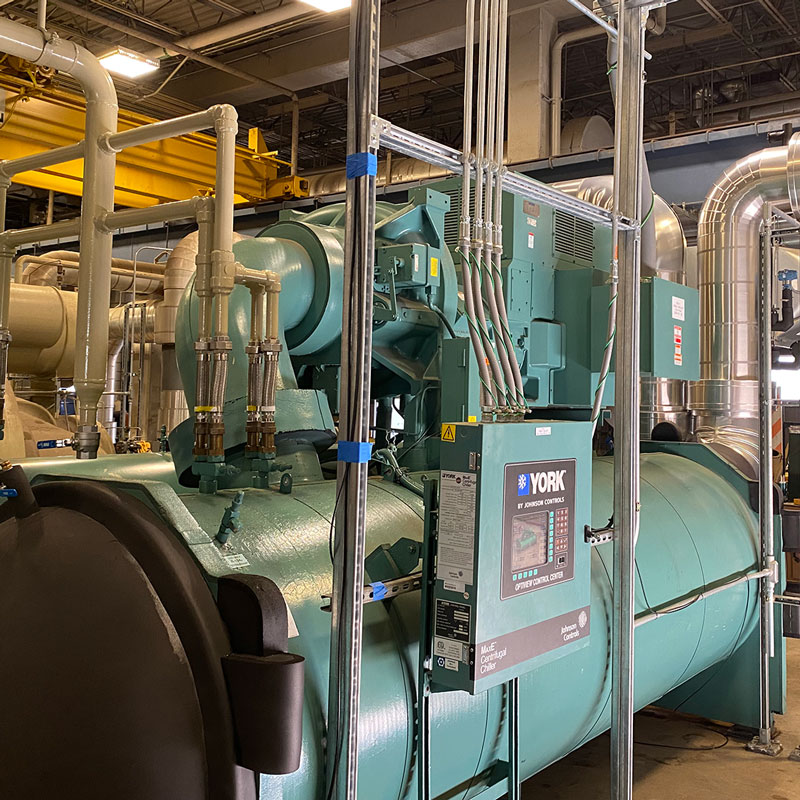