Texas Men’s Swimming Assistant Coach Wyatt Collins praised the operations and facilities crew of the TSC for going above and beyond over the last year to accommodate both the men’s and women’s swimming and diving teams.

“At every turn, they put the student athletes’ well-being first and did everything in their power to ensure our teams were well prepared in their pursuit of excellence,” Collins said.

Although the athletes could not practice as they normally would at TSC from March through August 2020 due to the pandemic, an outdoor pool for Texas Athletics was being built adjacent to TSC during that time. According to TSC Director Ann Nellis, the plan was for TSC staff to manage the outdoor pool once it was completed. Before that, though, TSC was heavily involved in planning and overseeing the outdoor pool construction in order for it to be open at the start of the fall 2020 semester.

Once practices were allowed to begin, TSC staff were on hand to support Texas Athletics’ procedures and the athletes. For example, staff implemented Texas Athletics’ COVID-19 policies, which are above and beyond the university’s policies, Nellis said. As an example, she explained that Athletics had a temperature screening machine to be used by each athlete as they arrived, in addition to strict social distancing and lane capacity requirements.

“With all of the COVID protocols in place, their staff had to work overtime in order to prepare the TSC for not only practices on a daily basis, but also dual meets and championship-style meets as well,” Collins said.

A significant role for TSC was turning the pool over, a phrase that means converting the pool from practice set-up to a significantly different competition configuration.

“We spent hours turning the pool over,” Nellis said. “The athletes and coaches didn’t have to worry about the set-up or anything else. We were kind of the silent partner. We work together as a team.”

Nellis emphasized how proud TSC staff were of the athletes and coaches.

“We’re just as proud of their NCAA wins as they are,” Nellis said. “As we’ve gotten to know them, we’ve found they are great people and champions in the outside world as well.” 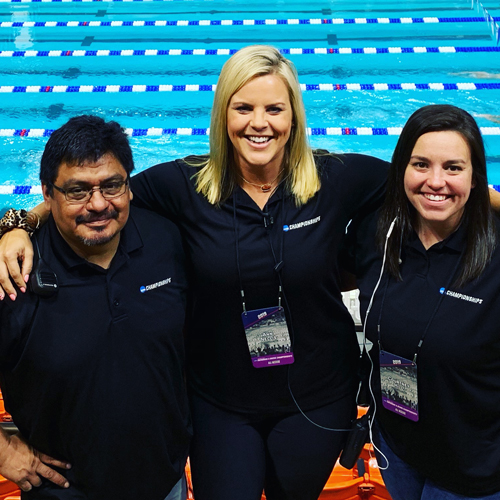