The opening of the new Frank Denius Family University of Texas Athletics Hall of Fame, located within the Red McCombs Red Zone in the north end zone of DKR-Texas Memorial Stadium, marked the beginning of the 2019 football season. This exciting and complex Texas Athletics project came to fruition through a broad partnership of experts and stakeholders managed by Project Manager Nina Hammoudeh of Project Management and Construction Services (PMCS). Through intensive vision, teamwork and dedication, the nondescript 24,800-square-foot facility food court was transformed into the Hall of Fame, representing all sports on the UT campus in a setting intended to inspire visitors, as Texas Athletics Director Chris Del Conte envisioned for the project.

“A Hall of Fame is to establish our rich history,” Del Conte said. “We need a place to say, ‘This is Texas. This is our expectation.’”

With the Hall of Fame, Texas Athletics has a focal point for recruits, donors, fans and the campus community—a key aspect of Del Conte’s vision, explained Hammoudeh. The Hall of Fame also honors the excellence of the university’s athletes and coaches, past and present.

“Visitors to the Hall of Fame embark on a journey to acknowledgement and celebration of what is Texas Athletics, a wider and deeper understanding of the story from the beginning,” Hammoudeh said.

The project had a short timeline, with August 31, 2019, as the hard deadline for completion. Nevertheless, the PMCS team led by Hammoudeh and made up of of Team Lead Chris Marks, Project Manager Christina Costa and Construction Inspector David Kruse, was passionate about ensuring that this highly challenging project culminated successfully.

Hammoudeh said that PMCS also engaged with the design firm, architecture and engineering company and construction contractor to create a customized, high quality space that would be the face of all Texas Athletics sports. Her role was to listen to these various parties and assist them in working through issues while maintaining forward momentum to ensure the deadline was met. Hammoudeh was involved with the project design from beginning to end. Mock-ups were created, assessed and modified repeatedly.

“We had to listen to and involve our clients,” Hammoudeh said. “At the same time, though, the deadline had to drive the project. We had to lead with influence and show them benefits of what we were presenting, while also providing structure and focus.”

Hammoudeh was also the on-the-ground manager on a daily basis once construction began. Marks served as liaison among Athletics and senior executives and managed ancillary projects supporting the Hall of Fame. This ensured that work could be completed as scheduled and all constituents were on the same page regarding the atypical funding of this project, which was entirely donor funded; the Denius family made a generous donation of $10 million toward the $17.1 million total project cost. The rest of the funds were donated by other donors and all donors are recognized in the Hall of Fame for their funding. Costa handled procurement and advances, and Kruse monitored the construction to help ensure adherence to contract specifications and building standards.

Hammoudeh said that to complete this project on time and within budget required that she and her team bring out the best in everyone up to the literal last moment before the Hall opened the evening of August 31. Everyone was committed to ensuring that the finished product was exactly as it should be when the first guests arrived, even including a final touch of potted plants at the entry way.

“It was like being part of opening night of a theater performance,” Hammoudeh said. “This could not have been done without all of the great partners.”

Hammoudeh described the completed project as featuring a balance of athletes, coaches and sports across time, in multiple, distinct venues that allow for future additions of trophies and other artifacts. Guests can move at their leisure from one type of area to another after first being greeted by a larger-than-life bronze statue of Bevo as they enter the Hall. She noted that the Hall has some digital features in various areas, with more to come.

“The result is an innovative space that is flexible and inviting enough to engage fans, donors, recruits, players and UT Austin staff,” Hammoudeh said.

She added that the Hall of Fame project also provides the Texas Association with a more accessible and modern office than it previously occupied, encouraging expansion of lifelong career development support for current and former athletes.

Thematic elements tie all the areas together, including finishes and logos representing each sport, Hammoudeh explained. As other Texas Athletics projects and spaces develop, they will reflect the branding elements of the Hall.

“Sometimes we can get lost in the idea of what our tradition is,” Del Conte said. “This Hall is the Texas way. You always have to be mindful of tradition. But you have to be futuristic in how you deliver that message.”

With the collaborative spirit brought to the Hall of Fame project, PMCS achieved a celebration of the traditions of Texas Athletics while sparking excitement and hopes for its future.

The COVID-19 pandemic has closed the facility to the public for several months, but the collaborative team is now involved in a number of updates, including the displays for the recently released Texas Athletics Hall of Honor Class of 2020, as the group readies the Hall of Fame for re-opening this fall. 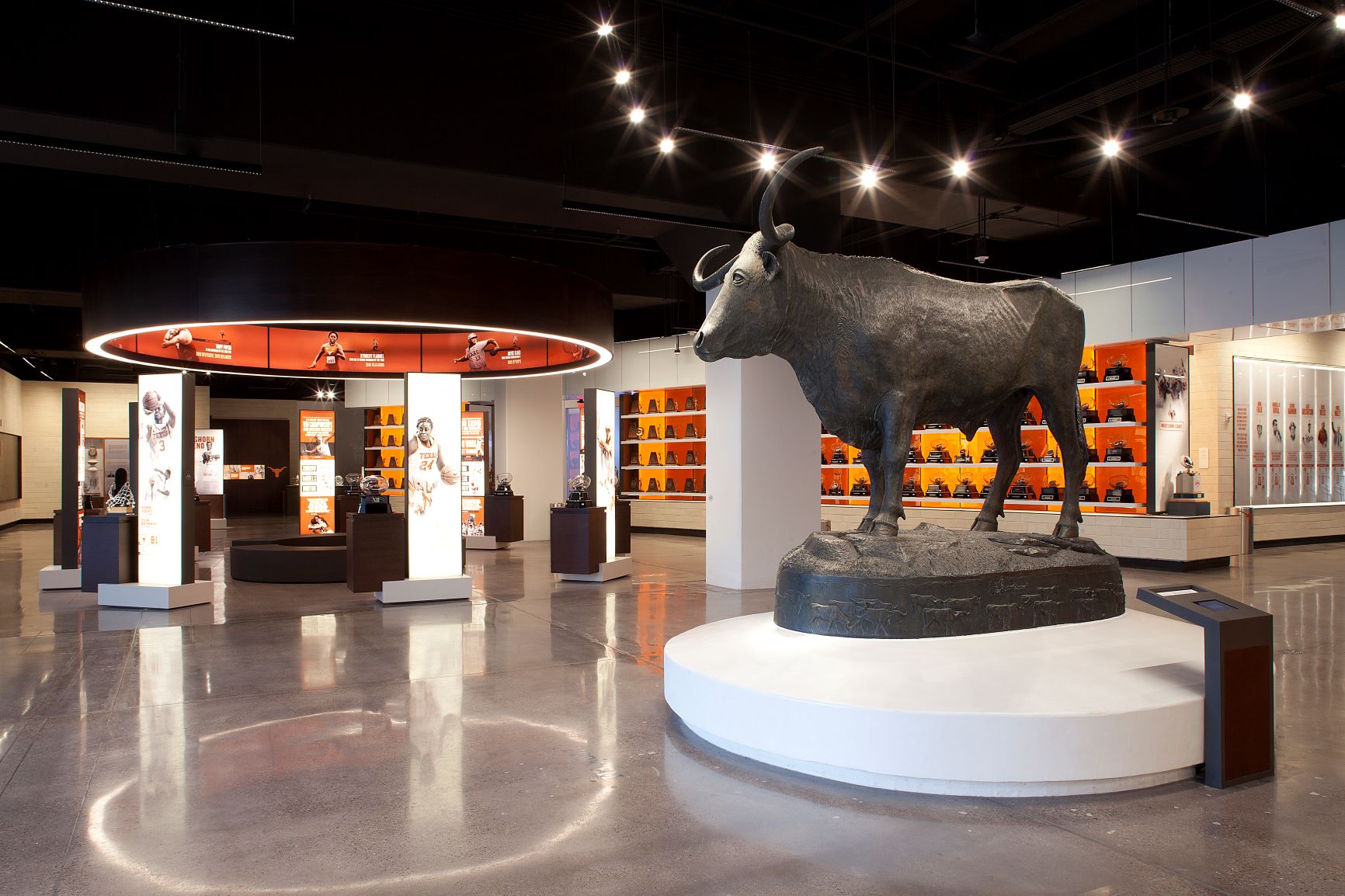