Achieving Zero Waste, a 90 percent reduction of waste sent to the landfill, is a long-term goal of the university. Although the reduction goal has not been accomplished yet, Resource Recovery Manager Bobby Moddrell said that the Zero Waste Program in Facilities Services’ Resource Recovery unit has recently taken additional creative and tested steps toward achieving the goal through a Green Fund collaboration.

Partners in the Green Fund included the Office of Sustainability, University Unions, University Housing and Dining, numerous building managers and teams of dedicated students. Moddrell explained that working with student interns and volunteers, the Zero Waste Program is providing the campus community with tools for identifying what types of waste go where, including easily recognized and understood disposal signage for bins and an extensive, easy-to-use waste sorting database.

Moddrell noted that signage had been identified as a problem early on in planning to achieve Zero Waste.

“Inconsistent signage across campus leads to confusion and contamination of recycling or compost bins," Moddrell said. “Reducing contamination is the key to a sustainable and effective system."

By spring 2020, developing the recycling database was well underway, and designing signage and planning for posting were launched in spring 2021.

“Building managers were the first to be emailed once the signage rollouts were planned for the summer," Moddrell said. “Our focus was on letting them know the rollout was happening and finding out about any construction or access issues. We held two meeting with them, then students began installing signage in buildings for use after the building managers had initial awareness."

To assist members of the campus community in determining whether specific items should be placed in recycling, compost, or landfill trash waste bins, signage displays a QR code that directs them to the online sorting database.

“I found throughout the year working with Resource Recovery that a lot of people didn’t know where things should go," Vega-Torres said.

When Senior Zero Waste Coordinator for Resource Recovery Lindsey Hutchison approached the intern with the idea of creating a database that would help people know which items go where, Vega-Torres was immediately on board.

“For about two months starting in March 2020, I compiled a list of all the possible items I could think of that people might throw away," Vega-Torres said. “I think there are about 200 or more in the database."

The database is designed for easy navigation. When users type in the name of an item, they are directed as to which stream to put it in. Typically, the answers are Landfill Trash, Recycle, and Compost, but other answers include Surplus Property, Environmental Health and Safety, and donation outlets.

“We’re trying to reach Zero Waste, but there’s still a lot of stuff going to the landfill," Vega-Torres said. “It’s being wasted. Hopefully, now more people will know where it belongs."

Signage went through a test phase in spring 2021 before it was introduced to building managers and posting began, explained Senior Zero Waste Coordinator for Resource Recovery Lindsey Hutchison.

“We plan to address the remaining buildings throughout the fall as campus construction is completed," Laner said. “We are also encouraging departments and buildings managers who are interested in additional signage to reach out to us, as we have limited quantities of extra posters."

Requests for signage can be sent to resourcerecovery@austin.utexas.edu. 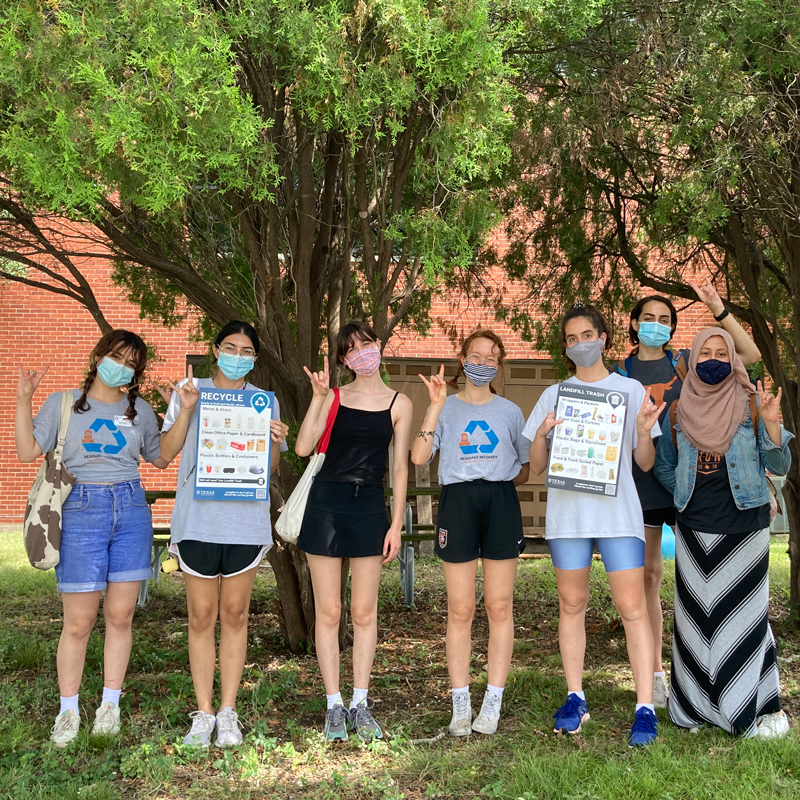