John Saunders Chase, the first African American student to graduate from the UT School of Architecture and the first licensed Black architect in Texas, designed a 1,450 square-foot building in central east Austin that is on the National Register of Historic Places. Built in 1952, it was originally the headquarters of the Colored Teachers Association and later served as the location of a neighborhood salon, the House of Elegance. Chase’s wife, Drucie Chase, was born in Austin, had strong ties to education and community service in Austin and Houston, and was committed to supporting John Chase in his architecture practice. Recently named the John S. and Drucie Chase Building, the structure will serve as the university Center for Community Engagement, housing the public-facing programs of the Division of Diversity and Community Engagement (DDCE).

The idea for renovating the building came about in 2017, when House of Elegance owner Pearl Cox decided to sell the property, according to Suchitra Gururaj, assistant vice president in the Office of the Vice President for Diversity and Community Engagement. Former UT President Greg Fenves saw an opportunity to bring prominence to the university with the purchase of the first property designed by the first African American graduate of UT’s School of Architecture.

“When the purchase was made, leadership of the Facilities team, the president’s office, and the Division of Diversity and Community Engagement suggested that the DDCE propose the space as our next Center for Community Engagement,” Gururaj said. “My team wrote the proposal, it was accepted, and as a collaborative, we embarked on a process of renovation. The idea behind recreating the Chase Building was to solidify Mr. Chase’s legacy and to create a next life for the building that lived at the intersection of diversity and community engagement.”

What became a restoration project managed by Project Management and Construction Services (PMCS) began as a building assessment project that came through the office of Ana Thiemer, PMCS associate director of Planning. Dorothy Fojtik, a PMCS project manager, started researching the building and was excited by what she learned.

“John Chase was such an interesting person and is inspiring,” Fojtik said. “I wanted to share what I found.”

She soon had that opportunity. Fojtik and PMCS colleagues Nathan Goodman, design team architect, and Doug Gilpin, associate director of Construction Services, began meeting with DDCE, which served as the point group for the project.

Fojtik explained that once DDCE was approved to occupy and the PMCS design team created a plan for them, the next step was to get an estimate for making the building suitable for occupancy.

“The estimate was more than we expected due to the escalating costs in Austin,” Fojtik said. “To save costs, we split construction between the PMCS shops and the job order contractor. Under the guidance of Don Havins, project manager of Construction Services, our specialized shops handled millwork such as shelves, cabinetry, door frames, and more, and the JOC did the rest. The result exceeded my expectations.”

Goodman noted that in addition to the PMCS shops, other FAS departments contributed to the positive outcome. Under the direction of Jaime Guerra, ITS engineer, and Jeff Martinez, ITS construction inspector, cabling needs and pathways were determined and executed early in the renovation process. Near completion of the project, Landscape Services offered renewal funds for landscaping, under the director of Jim Carse, manager, and Lisa Lennon, landscape architect, and Jennifer Hrobar, supervisor of Urban Forestry.

Early in the project, PMCS brought in an historical consultant that provided a conduit to the Texas Historical Commission.

“There was a lot of coordination and discussion about maintaining the historic aesthetic,” Goodman said. “From the design and construction side, work had to start from scratch. There were no as-built drawings. We had to do some investigation up front before we could propose solutions. Every difficult decision we had, we asked ourselves what would highlight Chase the best and will his family recognize it as reflecting him.”

Gururaj said she is grateful to Fojtik and Goodman for bringing their passion for the work and noted that everyone involved with the project was dedicated to stewardship of the building.

Meetings with the neighbors and signage around the construction site have been part of the process of sharing the project with the community.

“We wanted to be very clear with our neighbors, and we continue to engage with the community to be certain that UT is being a good neighbor,” Gururaj said.

Gururaj acknowledged the collaboration that has resulted in a successful renovation honoring the Chase legacy.

“It turned into a labor of love,” Gururaj said. “The collaborative aspect went beautifully. The building itself is beautifully done.”

The renovation was substantially complete in August 2021, and a soft opening for the family took place on Oct. 1, 2021. The grand opening will take place in spring 2022, and DDCE will launch programming.

The Chase Building project has earned a Preservation Austin 2021 Preservation Merit Award. Recipients will be honored at a celebration in December 2021. 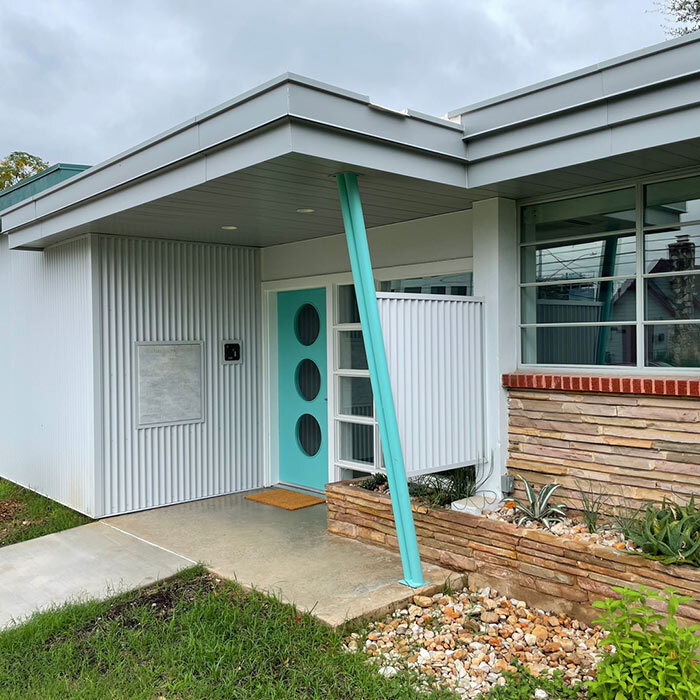