On October 9, Fire Prevention Services (FPS) made their annual visit to the UT Elementary School's Safety Day and Fire Drill, which correlates with National Fire Prevention week October 6 through 12. FPS used this opportunity to highlight the importance of planning and practicing fire drills while teaching fire safety to students ranging in age from pre-kindergarten through fifth grade.

“Safety Day is celebrated in order to raise awareness of practices that can help prevent fires and to promote fire safety while commemorating Fire Prevention Week,” said Waymon Jackson, UT Fire Marshal and Director of Fire Prevention Services. “Fire safety education is important at any age, and Safety Day demonstrates in a fun way how preparedness can combat panic during fire emergencies.”

Each year, National Fire Prevention Week incorporates a theme, and this year’s theme was “Not Every Hero Wears a Cape. Plan and Practice Your Escape.” FPS and Austin Fire Department (AFD) educated students on planning home escape routes, practicing those routes with their families and creating a meeting assembly point in case of separation while evacuating. Students learned how to perform manual tests on home smoke detectors and the importance of staying low in fires where there is more oxygen and less smoke. In addition, AFD stressed the seriousness of not playing with matches, cigarette lighters and other combustible items.

Next, the students toured the AFD fire engine with the fire fighters, and AFD exhibited the personal protection gear they wear when responding to a fire. This helped minimize fear most children have when seeing a firefighter in full gear in an already scary setting such as a fire.

A fire drill followed the fire engine tour. Then, Sparky the Fire Dog made an appearance, and by the children’s reactions it appeared to be most exciting portion of their day! Sparky is the official mascot for the National Fire Protection Association, and the FPS Sparky is J.B. Scurlock, an employee with the Office of Campus Safety and Security who is the FPS front office administrative assistant. This year’s UT Elementary School Safety Day was another exciting, educational day for the students and another opportunity for FPS to be of service. 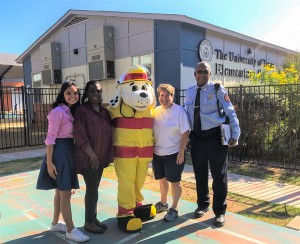