Sometimes you just need to make a big statement—a big splash—when you’re expecting a few people, say more than a hundred thousand or so, over for a much-anticipated event. That’s what happened when UT Austin’s Longhorns hosted the Oklahoma State Cowboys for the sold-out football game on September 21.

UT Athletics knew that the LBJ fountain would have the kind of impact they needed to express the excitement in the air on campus, but pre-season maintenance of the fountain revealed a mechanical issue that required major repairs. Fortunately for Athletics, they had partners to call on who wouldn’t let them down.

Behind the scenes, a collaborative team of facilities experts began working in August to develop a technical solution that, in the end, not only fixed the fountain’s major mechanical issue but shaved two weeks off of the expected downtime—in time for the Texas-OSU game.

A successful outcome such as this one takes technical know-how and experience found with a multi-disciplinary team. Working together from multiple Financial and Administrative Services (FAS) departments, team members can properly diagnose and implement a timely solution to the issue.

In this case, LBJ fountain’s 20-year old impeller, which is housed in the pump that provides the jetting function, sustained catastrophic failure. According to Brian Stokes, a maintenance engineer with the Engineering and Technical Support branch in Facilities Services (FS), rebuilding this pump and 125 horsepower (hp) motor was going to take six to seven weeks. Stokes had discussed the diagnosis with technicians from FS’s Zone 4 maintenance shop, who specialize in pool, spa and fountain maintenance. The technicians and contractors had pulled the pump apart to assess its condition. The FS team then determined the pump would need to be opened up and sent off to a contractor to rebuild, thus the delay. However, the story doesn’t end here. The team was determined to find a more timely solution to get the fountain up and running again sooner.

As Stokes explained, a second, 150 hp motor in the fountain’s system had been flooded in the past and had not run for many years. “We began looking at and testing this motor and pump when it was determined that the 125 hp motor was going to be six to seven weeks,” he said. “The motor bearings had seized, but otherwise the pump was in good condition. A new motor was quickly sourced and sent to a contractor for a few modifications so that it would adapt to the existing pump.” This second pump overhaul was a solution that would reduce the amount of downtime by at least two weeks!

A collaborative effort from several FAS departments then carried the solution through to its successful completion. Zone 4 technicians drained and cleaned the fountain while the repairs to the motor and pump were executed. A crew from Project Management and Construction’s General Construction shop teamed up with Zone 4 technicians to assist the contractor in getting the new pump/motor assembly into place. Zone 4 electricians made all the electrical connections to the motor. Utilities and Energy Management’s Electrical Distribution group provided support by managing the breaker feeding the system and restoring power when the installation was complete.

Zone 4’s Technical Trades Supervisor Alex Baldwin expressed how the on-the-ground efforts involved in repairing the fountain were “just one more example of the university maintenance departments working together, using all available resources in the face of adversity to achieve a common goal of making the college experience the best it can be.”

“A great team effort using contractor help, as well as the resources of Electrical Distribution, General Construction, and Engineering and Technical Support, reduced the expected downtime from six to seven weeks to four weeks,” said Associate Director for Facilities Operations and Maintenance Scott Griffin. Now that the fountain is fully operational, Griffin stated, “We intend to run the fountain for all home games.”

Now that’s how you make a big splash on campus! 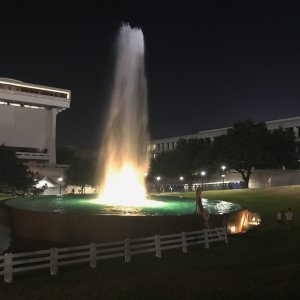