Capital Planning and Construction (CPC) managed a complex, recently-completed and innovative project to renovate the 1978 wing of Robert A. Welch Hall, a multi-use facility that housed lecture halls, administrative offices, laboratories and classrooms associated with five science departments, plus a large greenhouse located on the roof. Welch Hall was constructed in 1929 and expanded in 1961 (the west wing) and again in 1978.

The effort, which began in June 2017, was extensive, explains CPC Project Manager Keith Westmoreland, who says that outdated mechanical, electrical and plumbing systems, as well as aging equipment, had to be replaced. Inefficient lab layouts, inflexible lab and building services, as well as a lack of separation between classroom and research spaces, had to be addressed. In addition, various exterior wall and roof surfaces were showing signs of failure.

Despite the project’s complexity, four auditoriums and six classrooms were ready in time for the fall 2020 semester, with additional finishing touches completed in the following weeks. Westmoreland says the renovation supports learning.

“There are now lots of smaller, interactive classrooms that promote group work,” Westmoreland said. “Instead of the auditorium style of sitting in chairs and having one view, there are now multiple views and surfaces.”

As just one example of interactive spaces and multiple views, CPC Director Jim Shackelford points out the reimagined space on Level 2, which invites students to study and engage with one another.

“The renovated building includes new glazing on the east side of Level 2 that opens views to the Speedway Mall and soon-to-be-completed landscape,” Shackelford said. “The student interactive space in this area is now a large gathering area for students to study and socialize in a bright space filled with daylight.”

Shackelford says that a coffee café is located at the south end of the space, and the west side features the new Landmarks art piece Eon by Jennifer Steinkamp: a 9-foot by 30-foot video installation.

Westmoreland says that by modernizing the wing, the research aspect of it has changed significantly as well as its classroom and student engagement.

“Now, the 1978 wing reflects a philosophy of collaborative research,” Westmoreland said. “As one research project shrinks, other researchers can take advantage of the space. Lab assistants can look through glass walls to see what’s going on. It’s one of the most modern layouts of lab research.”

Achieving these positive outcomes was not always simple and easy. Part of the Welch information technology system runs through to other buildings on campus which affects other buildings. Another significant challenge was meeting new energy codes by replacing all of the windows.

“Retrofitting to meet codes is harder than meeting codes in a new building,” Westmoreland said. “Code today is far different from what it was in 1978.”

Westmoreland also cites the difficulty of conducting construction activities while two of the Welch wings (1929 and 1961) were still occupied.

“Research and classrooms were being utilized during construction, so we had to consider the occupants and minimize noise,” Westmoreland said. “We also had challenges with directing pedestrians around the construction site since you could walk from either the 1929 or 1961 wing directly into the 1978 wing.”

This large project and its complexities went beyond Welch Hall to the Norman Hackerman Building (NHB), notes Westmoreland.

“We had to build out three spaces within NHB to accommodate changes to the Welch 1978 wing,” Westmoreland said. “First was a new Greenhouse on top of the roof at NHB to replace the one on the roof of the 1978 wing. Then we built out shell space in NHB to relocate the Freshman Research Initiative labs. Lastly, we had to build out shell space in NHB for the Nuclear Magnetic Resonance (NMR) Spectrometers that were housed at Welch Hall.” 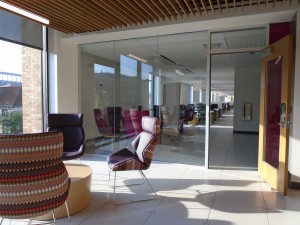 Social and study area in Welch Hall, with researcher seating and lab space beyond the doorway
Innovation